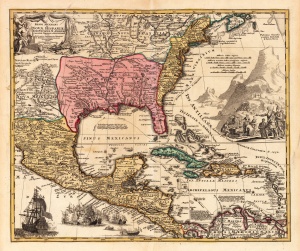 In launching a blog about the South, we figured it might be important for us to offer our definition of what the hell we’re talking about when we say “THE SOUTH”.

“The South” holds many different definitions. A Google search returns the following from Wikipedia, “The Southern United States—commonly referred to as the American South, Dixie, or simply the South—is a region of the United States of America. The South does not match the geographic south, but is predominantly located in the southeastern corner; Arizona, which is geographically in the southern part of the country, is rarely considered part of the Southern United States, while West Virginia commonly is.”

There is a reason that our understanding of “the South” is not purely geographic.

For us, the South is a place that is inherently moving and shifting. There are geographic borders, but it is also an idea of a place that lives both within and beyond those borders. The boundaries are always contingent and contested. It depends on who you ask and it depends on how you are using the definition.

First and foremost, it is a land first stewarded by the indigenous peoples of North America. Throughout the 16th and 17th centuries, European powers began the process of colonization. They stole and controlled the land by using violence, forced enslavement, and genocide of the native people. As a region rich with natural resources, the South was a fertile and profitable place to colonize. Southern society was built upon economic scaffolding that supported the continued control and extraction of resources. As Paul Gilroy said, chattel slavery is “capitalism with its clothes off.” These social and cultural power relations within its borders were an integral part of the growth and maintenance of the South as a global powerhouse beyond its borders.

The South continues to shift and change, while firmly rooted and tied to the history that it springs from. It continues to be filled with hope, pain, contradiction, and complexity. Growing diversity functions within histories of institutionalized racism. Entrepreneurship and and social ventures are launched from within tobacco warehouses. The concept of the “New South” is one that interests and concerns us as it seems to depict new development as a departure from the “Old South” instead of investigating the how the South’s history is intertwined in its current projects.

We see the South as anything but singular. It is layered, contested, and contradictory. But it is also specific. “Broadly Speaking” is an attempt to stand firmly on this anything-but-firm territory.

So, basically, when we say, “the South,” that’s what we’re talking about.

What do you have to say? Cancel reply